What is a Vampire Attack? Are we witnessing one take place before our very eyes?

A vampire attack, aptly named, refers to when one protocol attracts (sucks) liquidity from another. The most textbook example in DeFi was that of SushiSwap, thanks to the infamous “Chef Nomi”. Through his vision and financial incentives, he was able to siphon over $1 Billion in less than a week from various protocols, mostly Uniswap. So, what does this have to do with the traditional banking model? Good question, now let’s dig a little deeper into the details of SushiSwap’s notorious “Vampire Attack”.

Firstly, SushiSwap launched on August 28th, 2020 as a fork of the Uniswap protocol. Chef Nomi’s vision was to create a community governed AMM (automated market maker) with a much more fairly distributed liquidity model than Uniswap.

The main incentive to migrate liquidity was to allow the user to stake their Uniswap LP tokens within SushiSwap’s AMMs. Users would therefore gain extra rewards paid in SUSHI tokens as well as their existing liquidity providing rewards from Uniswap. This resulted in SushiSwap’s  market cap reaching $51,681,891 within 3 days after launch.

Users could stake their Uniswap LP tokens into the corresponding list of pools. The list of eligible LP tokens/pools is shown below and can change as per on-chain governance.

Other than the staking of the Uniswap LP token in SushiSwap pools, what other incentives were used in this vampire attack? Sushi started with a high emission schedule whereby at every Ethereum  block, 100 SUSHI tokens were created. These tokens were equally distributed to the stakers of each supported pool. However, For the first 100,000 blocks (~2 weeks), the amount of SUSHI tokens produced was x10, resulting in 1000 SUSHI tokens being minted per block. With the Sushi/WETH pool receiving double the amount creating greater incentive to provide liquidity within SushiSwap’s AMM’s. It was a liquidity snowball!

Another initial strategy that proved successful was its open approach to applying the protocol to different chains and scaling solutions. Instead of trying to predict which environment will be most dominant and will capture the most value, they applied to popular and upcoming environments and let the market decide. A strategy similar to many other protocols such as the YAM project.

On September 1st, 2020, Binance announced the token listing of SUSHI, which resulted in the price of SUSHI going as high as $15, and almost $1 billion in locked value. A few audits were also completed with no major issues found, proving bullish for the project. On September 5th, Chef Nomi sold his entire SUSHI stake ($14M) for ETH. Since there was no team allocation this was done through his access to the developer fund. It’s worth noting that 10% of all tokens in circulation were in this fund, which Nomi dumped. After incredible public chastisement, Chef Nomi tried to justify his actions, but to no avail.

Chef Nomi decided to leave the project, but in an unexpected act of penitence transferred the control of the project to Sam Bankman-Fried (SBF), the founder of FTX exchange. He swiftly took action and increased LP rewards, to attract even more liquidity.

SBF and his company Alameda Research came out with a proposal of migrating a part of SushiSwap to a new trading platform called “Serum”, built on the Solana blockchain.

Even though sufficient liquidity had been attracted to Sushi, there was still one more step: migrate the staked LP tokens. Through its Masterchef contract, the LP tokens were migrated so that the new platform (SushiSwap) could use it for their own AMM: sucking in their liquidity, trading volume and existing users.

Once the Masterchef contract was triggered this migrated LP tokens from Uniswap to SushiSwap. The grand plan worked, and SushiSwap managed to accumulate over $1.2 billion in liquidity in the days that followed.

So we ask again “What does this have to do with traditional banking?”  Data suggests that DeFi is growing at a faster rate than traditional banks in value created and value locked. Between 2020-2021 there was an 11% increase in total assets held by banks, compared to DeFi where there was a 903% change in total locked value from 8.675 billion to 87 billion.

Although Defi is significantly smaller compared to “traditional” finance with the total locked value of DeFi being a paltry ~0.00875% of total assets in CeFi (2021). The rate of growth in DeFi is very promising, as liquidity is being moved at an increasing rate from “traditional” finance to DeFi , especially as adoption continues to increase exponentially. 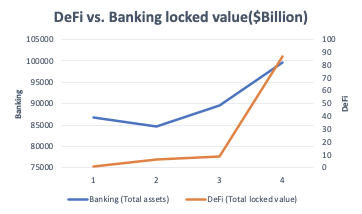 This embodies a vampire attack, the only difference is that there are no clear incentives put in place by Defi protocols to suck the liquidity out of CeFi, except better value to users.
It is all happening organically. The rapid organic growth of DeFi is a signal that people want a more open financial system which will only accelerate overtime.

That is what we’re all about.
We’re offering a better value proposition to our users & community, than any existing bank, stablecoin or exchange.

Be part of the future and join us: