Stablecoins are at near all-time high, with a market capitalization of over $112 billion at the time of writing. They have emerged as a necessary foundation for crypto, powering DeFi’s growth. Never before have they been used this much. They convey stable value and a link to traditional finance, which BTC and ETH do not.
They’re an easy way to de-risk or secure profits from DeFi, without leaving the ecosystem to go to fiat which is often slow and expensive.

The exchange between stablecoins and actual fiat currency is similarly slow, expensive, and sometimes unreliable. There is no simple, cheap, and fast way to redeem your stablecoins for the underlying fiat. Users are forced to rely on 3rd party crypto exchanges to move between the two worlds, which is costly, slow, and impedes DeFi adoption. On top of that, many stablecoins are unregulated, untransparent, and juggle different banks and jurisdictions.

“Tether’s claims that its virtual currency was fully backed by U.S. dollars at all times was a lie. These companies obscured the true risk investors faced and were operated by unlicensed and unregulated individuals and entities dealing in the darkest corners of the financial system.”

Despite the massive allegations and lawsuits against Tether, it remains the largest stablecoin in market cap and volume, and is the 5th largest cryptocurrency by market cap. Many people are still holding significant value in an unregulated, untransparent, and thus risky asset.

In the US, the President’s Working Group on Financial Markets, led by Janet Yellen, is investigating whether stablecoins pose a systemic threat to the financial system. There are no prizes for guessing what they are likely to conclude.

In light of ever-increasing regulation, this can’t go on. While our crypto community touts the mantra “Don’t trust, verify”, we put a lot of trust in something so fundamental to our own system, and not a lot of verifying.

Some other stablecoins are better than Tether, but their periodic, centralized “audits” don’t scratch the surface of what is possible in transparency, cost, and speed. DeFi can do better.

This problem spawned DigitalDollar (DUSD), like a stablecoin, but secure.

To be honest, we created DigitalDollars by accident.

We were not trying to revamp the “stablecoin”; we were trying to find a way for our users to go seamlessly from their bank account into DeFi and back.
A pinch point, which hurts adoption, is the need to go through expensive and slow centralized exchanges, and usually more than one.
We are building in these two architectures and wanted to find a way to bridge the two worlds. After a frustrating experience exploring centralized exchanges and OTC desks, we thought: why don’t we just build the bridge ourselves? I mean, we are fully integrated into traditional banking infrastructure, why don’t we just replicate a user’s balance on the crypto side?

And then we thought, well, if people could do that, then they wouldn’t need to go through exchanges. We could give them a bank account from which they can mint a 1:1 backed representation of what they held in cash directly on Ethereum.
That would be pretty cool, we thought.

We also wanted to be as trustless as possible, so we created a smart contract that doesn’t allow minting more DUSD than is held in the fiat side reserves, which can be verified 24/7 on-chain. So all our coins are verifiably backed 1:1 by real dollars, not commercial paper or other complex financial products.

And then we thought, we don’t want to be a centralized entity controlling the mint process, so we decided to move our treasury and mint function to community governance under a DAO structure: the DeFi Bridge DAO.
More on that later.

And then we realized that we had created the DigitalDollar(DUSD). A full reiteration of the “stablecoin”, perfect for DeFi, used by degens and normies alike.

The future is going to be amazing. Unless you’re a bank. Or a centralized exchange. 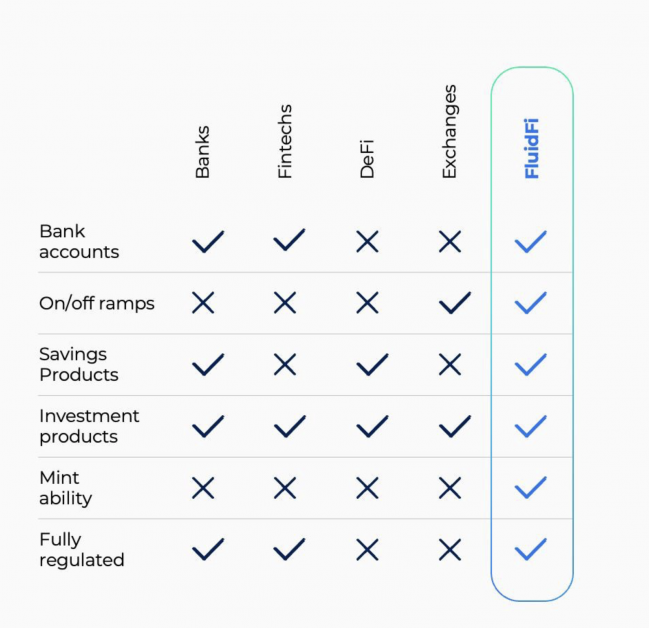 A Reiteration of the “Stablecoin”

Unlike non-existent transparency, or limited periodic reports, we turned transparency on its head using blockchain technology.
First, the smart contract is coded in such a way that it is impossible for there to be more DUSD coins than USD reserves.

On top of that, anyone will be able to verify the balance of the reserves on-chain, 24/7. It’ll always be 1:1 backed.

How this works, sounds surprisingly simple, yet it’s revolutionary: the user is the mint. Picture this:

You deposit $1000 to your Fluid Account, where you now have $1000 ordinary dollars. At the click of a button, you can ‘mint’ these into 1000 DUSD, and transfer them to anywhere such as Uniswap, or a Yield farm (later integrated natively). If you want to cash back to dollars, you simply deposit back your DUSD, and press the ‘burn’ function, which burns these DUSD tokens and credits your account with the equivalent in ordinary dollars again. Within a few minutes, and cheaply (thank you, Arbitrum). There are always as many reserves as DUSD:

Thus, ensuring a perfect 1:1 backing of real dollars. Not commercial paper, or other complicated financial products.

The fiat reserves themselves are held in Client Safeguarded Accounts.
But, it also means that people can take advantage of any price differences. Because we are so fast and cheap, it effectively encourages people to arbitrage away any differences in price that may happen.

We are also as decentralized as we can be, and this will gradually increase over time.
DUSD, as well as other tokenized real-world assets in the future (more on this later), will run via the Defi Bridge DAO. It has its own governance tokens to vote on rules, additions, and collect fees. Many of these governance tokens will be airdropped to different parts of the community, more on this in a later article introducing the DAO.

For security, we went to one of the best. Solidified, known for auditing OpenSea, Loopring and Polymath for example, has audited our smart contracts, see the report here.
But, we don’t believe a single audit at one point in time is enough. Contracts change, updates get added, products evolve. For that, Alexander Remie, a senior blockchain security engineer that has worked at ChainSecurity and Trail of Bits, has joined our tech team.
Together, they should form a strong foundation for us to grow massively in volume, liquidity, and adoption, without ever putting our users or ourselves at risk.

DigitalDollar (DUSD) was designed from the ground up to be a reiteration of the “stablecoin”, complying with regulations, and integrated into traditional banking infrastructure.

Fluid Finance is a bank alternative based and regulated in Switzerland. Essentially, we are a fintech in front and DeFi in the back. It is what the Bankless guys call a “DeFi Mullet” (although that isn’t exactly the hair style we are going for).

We also have all the required partners such as banks, as well as CurrencyCloud for low-cost cross-Fiat exchanging, which is also used by other neo-banks such as Revolut, allowing us to scale up to 500,000 users on our current plan.

To get a bank account you need to do KYC, under Swiss regulations. Your data is protected by Swiss privacy laws. It takes about 3 minutes.

You might think this sounds great and is how a stablecoin should ideally function, but for the future we have even bigger plans. At every step of the ecosystem, we’re trying to make DeFi easier, faster, cheaper and stronger.
Imagine integrated DeFi yields inside the app, from Aave or Curve pools for example. Essentially adding DeFi yield products to your bank account.

And the same tech (and DAO) that’s used to prove USD reserves on-chain to create DUSD, can be used to tokenize stocks or even commodities, as well as be open-sourced for 3rd party banks to join us with DUSD.
We’re considering adding a DEUR, DGBP and DCHF as well, but there isn’t much of a market for them (yet!).
However, innovation comes from experimentation, and there are many interesting ideas for us to pursue. All we need is time, and volume.

To kickstart volume, we will be launching a referral program and leaderboard, rewarding you with DBD tokens for every user that signs up for a bank account through your link.
On top of that, we’re considering NFT achievements and certificates for passing milestones like trading volume, amount of people referred, and more!

There will be a reward program for:

📆 Be part of the Future, get notified when we launch:

Selected members of our community are currently testing the beta version of our web app. Our public product is estimated to go live soon.