The crypto system will replace the current payments industry in the next decade. Here is why

The existing cards-banking system is based on pull technology, which is complex, costly and prone to fraud. The crypto payment system, based on push technology, is simpler than and will replace the old system. A decade from now no one will use the pull-based system; it will completely disappear.

The plumbing necessary for credit card payments, combined with the traditional banking industry, is illustrated below. Add another 5–8 steps for cross-border payments. 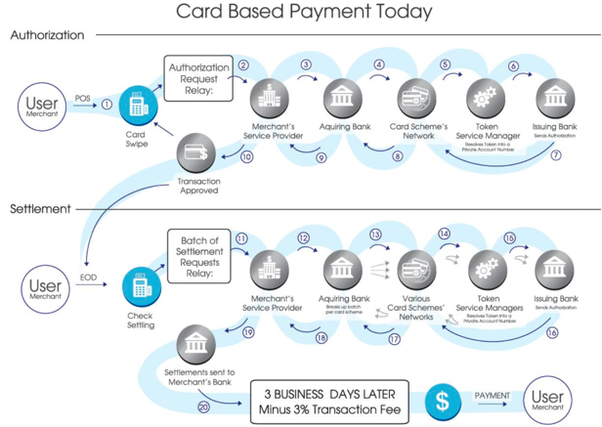 If it looks like it was cobbled together in a fit of absent-mindedness based on 1970s technology, that is because it was.

The biggest weakness in the payment system is security, which is vastly inferior to the crypto system.

Here is how the crypto payment system works:[1]

Visa, Mastercard, JCB, UnionPay: they will all face their Kodak moment in the next decade. Same for PayPal, Square, makers of point of sale equipment, etc. It is like fixed telephone line switchboard systems: no longer needed.

Of course, people won’t stop using credit cards overnight, but most people will not have a credit card a decade from now. But, bankruptcy? There are two important things to realise about the structure of the credit card processor industry (in addition to the vastly inferior technology): it has a high break-even point and a large number of self-interested, uncoordinated participants fighting for industry profits. Think they might adapt to the crypto system? Maybe about as easily as a school of fish might adapt to using bicycles as a new means of getting around.

Merchants will drive the change

Worse, long transaction reconciliation times have a negative impact on merchant’s working capital. With credit cards, maybe you think you have paid for that latte right away, but the money reaches the merchant days later. The merchant also bears the risk of chargebacks for a considerable period of time after: typically for up to 90–120 calendar days (based on a “Central Site Business Date”). Chargeback costs to merchants is expected to reach $31 billion by 2020.[2] In 2016, only 23% of chargebacks were in relation to identity theft. So-called “friendly fraud” accounted for 28% and “chargeback fraud” accounted for another 28%.[3]

Lack of security with the current system

The other major difference between the soon-to-die credit card push system and the crypto system that will replace it is security. With your credit card, you are not actually making a payment. What you are doing is giving an approval (based on your Personal Account Number) to the merchant to pull money from your account. Since the merchant is just the end link in the payments chain, the merchant’s system needs to transmit your account details to every other entity in the process. So, you, the customer, effectively have to trust all of the 20 parties in this chain. Payment processors biggest cost is security; they spend billions each year on trying to prevent fraud. Think maybe you were not affected? In 2017, the Identity Theft Resource Center counted 1,579 data breaches in the United States, up 45 percent from 2016, affecting 178,955,069 records.[4] Credit card fraud in the US exceeded $7 billion in 2017.[5] In the United Kingdom, 4.7 million people reported their credit card lost or stolen or misused, with an average loss per person of £833 pounds.[6] Financial institutions globally are expected to spend $9.2 billion by 2020 to prevent credit card fraud.[7]

In the crypto system, what keeps push payments from A to B (which could be individuals, or an individual to a merchant, or a business to a business) safe is simple and based on: (1) keeping your private keys (basically a long complex password) secure and (2) the community working together, based on economic incentives to keep the system database protected. All system users basically contribute a small amount to a diverse group of system supporters to ensure that it remains safe. The crypto system is mathematically almost impossible to break. There are some weak points (like exchanges, which are just SQL databases) but these are not part of the crypto system.

In the crypto system, security costs are a tiny fraction of the amount spent by traditional players. To criticise the crypto system for excessive electricity costs is simply the big lie strategy: it isn’t comparing the role the miners play in the system to the equivalent functions required in the fractional reserve banking and payments systems and by society. Losses in the genuine crypto system are almost non-existent, compared to an astronomical amount of money lost to payments fraud. The only effective way to eliminate payment fraud almost entirely and the costs of trying to prevent this fraud is to adopt the crypto system.

Vitalik Buterin has the annoying trait of being really honest and open about technical issues in the crypto system. In respect of payments, this is the scalability trilemma, which posits that (at the moment) a blockchain cannot have all three of these characteristics at the same time: decentralised, scalable, and secure; it can only have two of the three. It allows bank-funded economists to ignore the superiority of the crypto system over the fractional reserve banking system and the payments system and focus on issues important to them: the horrifying possibility of cold lattes.

Being rude to Vitalik for slow processing[8] and concluding that the crypto system will never reach its potential is like yelling at Gordon Moore in the 1960s that there are not enough transistors on a microchip to do anything useful. First, tech scales exponentially; it is a bad idea to bet against that. Second, there are also many interim solutions. With a proper crypto bank, for example, the crypto bank could guarantee to the merchant the availability of funds immediately, even if it will take a few minutes after to settle on the blockchain. Third, the criticism applies to small payments where speed is important, but there is a vast market for larger payments where settlement could be in minutes, not seconds, and still be vastly superior to the present system. That is why crypto transfers will start at the larger end: payment for large shipments of coffee beans can take days to process through the banking system. In this part of the chain, commodity players would be ecstatic to wait 10 minutes for confirmation and finality.

[1] You could add some minor complexity, like wallet details or maybe Alice and Bob will use a form of a crypto bank in the future, but the heart of the push system in crypto is just this simple.

[4] Note: only covers those data breaches notified by companies to authorities. Of these notified breaches, 37% of notifications did not quantify the number of records — such as Social Security numbers and payment card data — that was exposed.

[6] Report commissioned by Comparethemarket.com, for the last 12 months to July 2018.

[8] From the latte buyer’s, not the merchant’s perspective.